“All his life he had roamed about the world aiding the weak and fighting oppression; he neither knew nor questioned why. That was his obsession, his driving force of life. Cruelty and tyranny to the weak sent a red blaze of fury, fierce and lasting, through his soul. When the full flame of his hatred was wakened and loosed, there was no rest for him until his vengeance had been fulfilled to the uttermost. If he thought of it at all, he considered himself a fulfiller of God’s judgment, a vessel of wrath to be emptied upon the souls of the unrighteous." 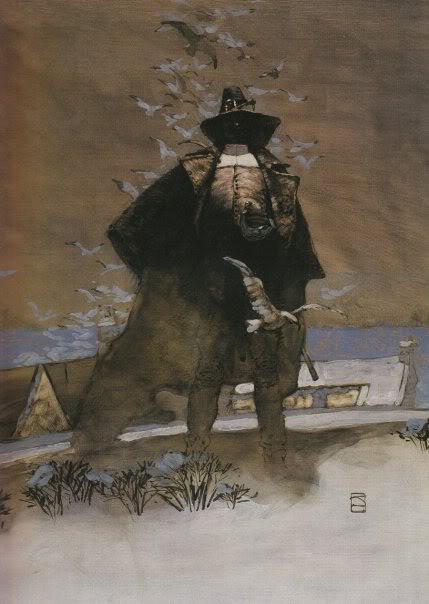 The white gulls wheeled above the cliffs,
the air was slashed with foam,
The long tides moaned along the strand
when Solomon Kane came home.
He walked in silence strange and dazed
through the little Devon town,
His gaze, like a ghost’s come back to life,
roamed up the streets and down.

The people followed wonderingly
to mark his spectral stare,
And in the tavern silently
they thronged about him there.
He heard as a man hears in a dream
the worn old rafters creak,
And Solomon lifted his drinking-jack
and spoke as a ghost might speak:

“There sat Sir Richard Grenville once;
in smoke and flame he passed,
“And we were one to fifty-three,
but we gave them blast for blast.
“From crimson dawn to crimson dawn,
we held the Dons at bay.
“The dead lay littered on our decks,
our masts were shot away.

“We beat them back with broken blades,
till crimson ran the tide;
“Death thundered in the cannon smoke
when Richard Grenville died.
“We should have blown her hull apart
and sunk beneath the Main.”
The people saw upon his wrists
the scars of the racks of Spain.

“Where is Bess?” said Solomon Kane.
“Woe that I caused her tears.”
“In the quiet churchyard by the sea
she has slept these seven years.”
The sea-wind moaned at the window-pane,
and Solomon bowed his head.
“Ashes to ashes and dust to dust,
and the fairest fade,” he said.

His eyes were mystical deep pools
that drowned unearthly things,
And Solomon lifted up his head
and spoke of his wanderings.
“Mine eyes have looked on sorcery
in the dark and naked lands,
“Horror born of the jungle gloom
and death on the pathless sands.

“And I have known a deathless queen
in a city old as Death,
“Where towering pyramids of skulls
her glory witnesseth.
“Her kiss was like an adder’s fang,
with the sweetness Lilith had,
“And her red-eyed vassals howled for blood
in that City of the Mad.

“My feet are weary of wandering
and age comes on apace;
“I fain would dwell in Devon now,
forever in my place.”
The howling of the ocean pack
came whistling down the gale,
And Solomon Kane threw up his head
like a hound that snuffs a trail.

A-down the wind like a running pack
the hounds of the ocean bayed,
And Solomon Kane rose up again
and girt his Spanish blade.
In his strange cold eyes a vagrant gleam
grew wayward and blind and bright,
And Solomon put the people by
and went into the night.

A wild moon rode the wild white clouds,
the waves in white crests flowed,
When Solomon Kane went forth again
and no man knew his road.
They glimpsed him etched against the moon,
where clouds on hilltop thinned;
They heard an eery echoed call
that whistled down the wind.

“The dreams again?” she asked knowingly.

“Aye,” was the grunted response she received.

“The same as before?”

“Aye, but they grow more intense.”

She reached out to wipe the sweat from his anxious brow. The dreams came every night, and she saw now that they were taking their toll on her husband. He grabbed her hand and held it to his cheek.

“That Ju-ju man keeps waving to me. I see a glimpse of Kane from behind. Then nothing. He vanishes, and I’m left with the feeling that…”

“What Thomas? The feeling that,” she let the last word hang hoping it would entice him to finish.

“Thomas, thou knowest I grasp these things. It is because of the mystical that Solomon came into our lives. The dreams will guide thee.”

“What?!” he choked incredulously. “You think I should leave?”

“The path may not be clear, but the message is. If thee refuse, it’ll grow worse. thou knowest it as well as I, Thomas.”

Emma watched her husband as he tightened down the last saddlebag. She moved towards him with a prominent limp as he moved around his mount under the pretense of checking the saddle. She understood his hesitation and meant to put him at ease.

“Alone. After all we’ve been through…All we’ve seen? I couldn’t bear it if something were to happen to thee.”

She squeezed his hand, and he drew her close. “I’ll be fine. We’ve been safe here for months now. If the bastards come again, I’ll be ready for them.”

Thomas shuttered unintentionally. It was true her powers grew, but they made him uncomfortable. To her credit Emma ignored the shutter even though it cut her to the bone.

“I love thee Thomas.” She kissed him hard on the lips. “Thou must go.”

“Aye. I love thee too.” With those words he swung into the saddle as if the words themselves force him up.

As Thomas’s silhouette grew smaller in the distance, Emma could not help but think how alone he seemed on his path. But she knew he would not be alone for long. Soon others would heed the call and walk the Path of Kane. 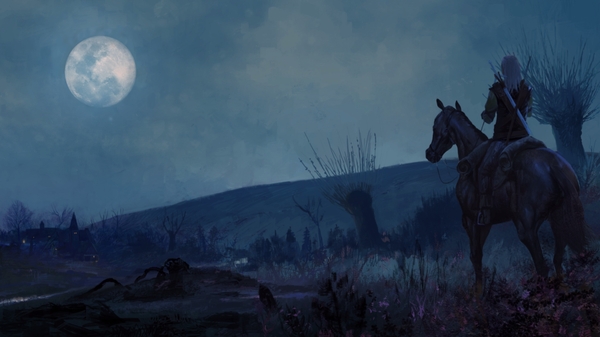 The Path of Kane Comments

I'm sorry, but we no longer support this web browser. Please upgrade your browser or install Chrome or Firefox to enjoy the full functionality of this site.